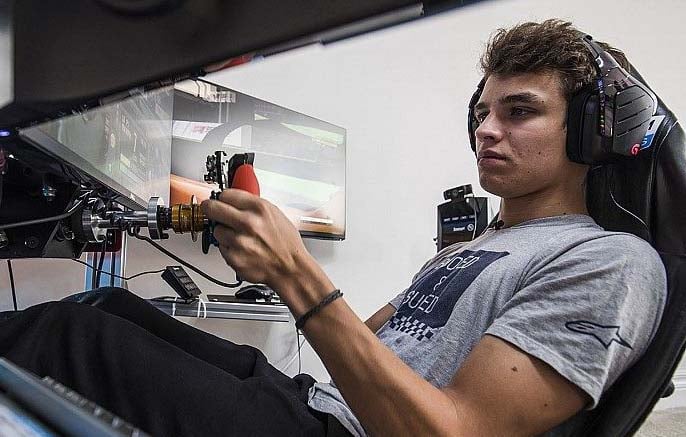 After the world of motor sports got to know that Max Verstappen spends a lot of time driving in a racing simulator, another Formula 1 driver – Lando Norris – joined him. He also has a lot to say about the advantages of racing simulators!

The young Formula 1 driver racing for McLaren, Lando Norris, entered the F1 world only recently, but since his debut he shows us that he definitely has the potential. But the question arises – how can a 19-year-old boy behind the wheel of a Formula 1 car be as good, as many other pilots with years of experience? The answer can be found in racing simulators.

Lando has been fond of them since his childhood, but in preparation for his career in Formula 1, however, from ordinary children’s simulators that allow driving for entertainment, got to professional racing simulators, which in addition to driving pleasure will bring pilots a lot of knowledge and skills to real F1 race. He recently even got into Team Redline‘s iRacing team, racing alongside another Formula 1 driver, Max Verstappen. What benefits of racing simulators does Lando Norris emphasize?

It is precisely the opportunity to look behind the scenes of setting up an open-wheel car. That is appreciated by Lando Norris, who has learned a great deal about Formula 1 technologies, and how they can be customized through setting up racing simulators. While in real life, it takes a few hours to tune one part of a Formula 1, in a racing simulator, you can try each change in seconds – in just a few clicks.

F1 drivers work very closely with engineers who adjust the technical aspects of the open-wheel car according to the driver’s requirements. A professional racing simulator also allows you to adjust the behavior of the car. In the case of the simulator, however, the driver sees much more straightforward and clearer, how changes to the car’s settings reflect in its driving behavior.

To conclude, one specialty – Lando Norris in his racing simulator uses the Cube Controls Formula wheel , which you can get in our e-shop!